I’ve been n00bing it up hard core lately. Like a ridiculous amount of n00bing. Evidence:

– I read most of my news online through ABC and SBS. The other day, when I couldn’t find something I was looking for on either of those sites, I drew a complete blank on where else I could look. I googled ‘Sydney + news’ and of course the SYDNEY MORNING HERALD was the very first thing to come up followed by news.com. After I reprimanded the googles for being such a Captain Obvious, I gave myself a smack across the head on behalf of less n00by people everywhere.

-There’s a man at work called Rowan Russell. My brain can’t seem to cope with the fact that his last name sounds like a first name. Every time I speak to him I call him Russell. He’s given up correcting me.

-We’ve been doing work with a company called XXVI. I spent an entire day introducing them to peeps around the place as Twenty One. At the end of the day when I looked at their business card I realised my mistake. But seriously, why are people still using roman numerals? I thought it was the numeral system for ANCIENT Rome?! Not a Sydney design company.

– Whenever I use Ian’s kindle, I try to scroll or expand the text on the screen with my fingers. Every single time, Ian watches me do this without saying a word. No doubt he’s wondering how it was possible he ended up with me.

Unfortunately there are more examples. But for now I think it’s best we leave it four. Or is that IV? 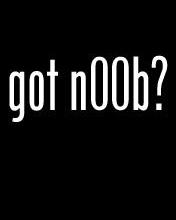 One thought on “And in n00by news”