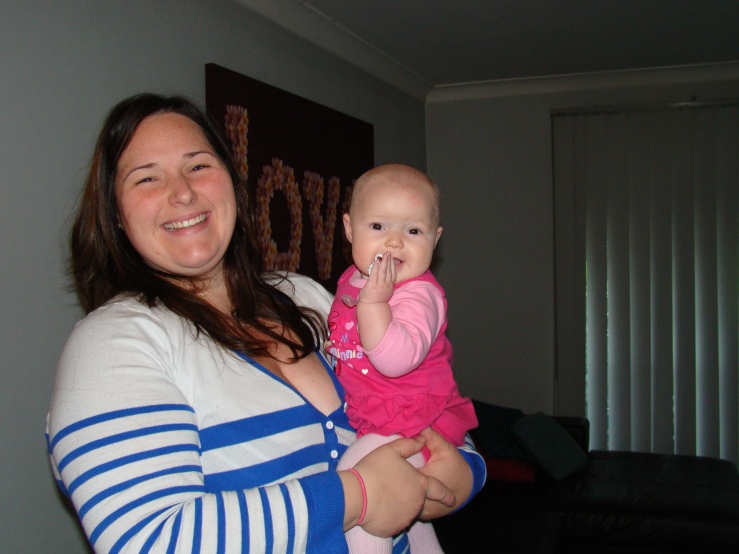 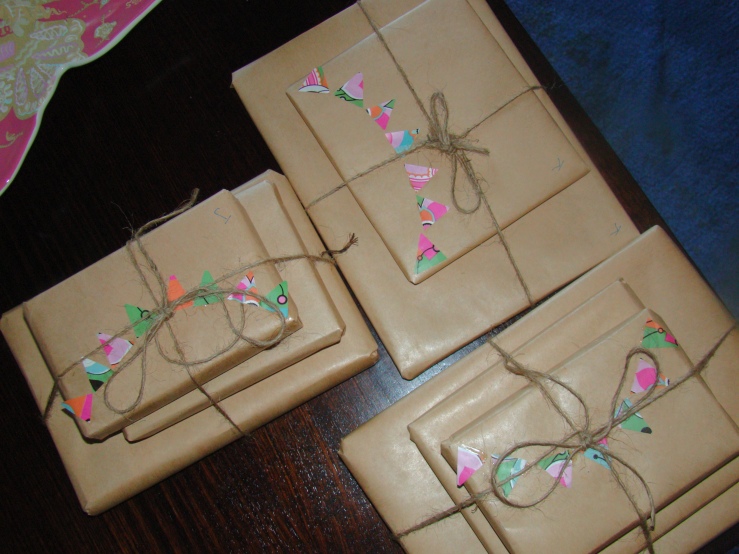 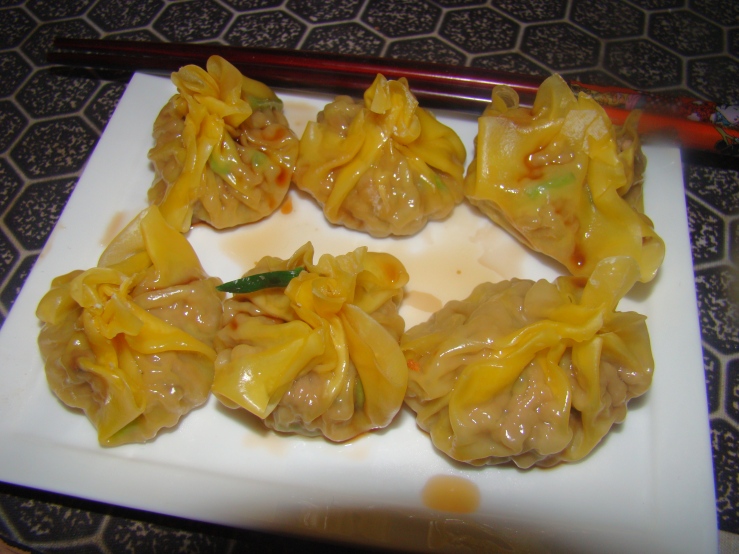 1.  Laughing with Donna & Ella
2.  Play time with my honourary niece
3.  Brown paper packages tied up with string
4.  Kylie using her best primary teacher voice to read a most inappropriate book ;)
5.  Sheels cutting her tall cake…
6 . The surprise inside – rainbow layers of awesomeness!
7. Dumpling dinner
8. Aroma Festival
9. Gingerbread men
10. Love letters from friends
11. A jar of origami stars from Sheels – she wrote a  beautiful quote into each one before she folded them up for me

My soul  is all filled up. In fact, I think it might be overflowing!

I’ve seen most of my favourite people this week and that makes me very, very happy.

Some people talk about how socks strangely disappear in their homes. Two go into the wash, only one comes out.

At the Jackson residence, it’s book marks that we lose on a regular basis. I am convinced that Ian is responsible for this as he regularly ‘borrows’ my book marks and then never gives them back. I’m hoping that one day when we move out of our flat, that a huge pile, lost over the years will suddenly turn up.

The book mark below is one I’ve been deliberately hiding from E when I’m in between books. This one is too cute to go missing! Leigh & David bought it for me in Tibet (or possibly Nepal) and every time I look at it I feel happy. Those cute little feets, sticking out my book – it’s just too adorable!

I also really love the look of this bookmark which I saw on pinty.

I guess we could just dog ear our books and not have this problem….but I could just never bring myself to do it. It feels like such a mean thing to do to a book, don’t you think?

What a week! I’m not sure if I can actually remember what the sun looks like or what it feels like to be completely dry.

Last weekend when the grey, rainy days started, I convinced myself that a summery salad would somehow help make the day feel less like winter.

It didn’t work. Not at all. Probably because I made it while staying in the coldest house on earth (parent palace).

It was delicious though so I shall share the recipie.

Method:
1) Toast the bread in a 180 degree oven until dry and lightly covered. Leave to cool.

2) Combine the bread, tomato and onion in a bowl. Tear over the basil leaves and add the parsley. Season with salt and pepper. Drizzle with the oil and vinegar and toss thoroughly before serving.

This salad is pretty much like the Italian version of fattosh. It was positively bursting with the freshness of tomato and basil! Perhaps next time though I’ll make it when the weather is more than 10 degrees. In the mean time, I’ll stick to soup.

Meeting this little guy made me very happy.

My cousin Dom and his wife Amanda are doing a great job keeping our family name going strong.

Welcome to the world James.

…I’d really, really want this giraffe. Heck, I really want it now, even though I’m heading towards thirty two! 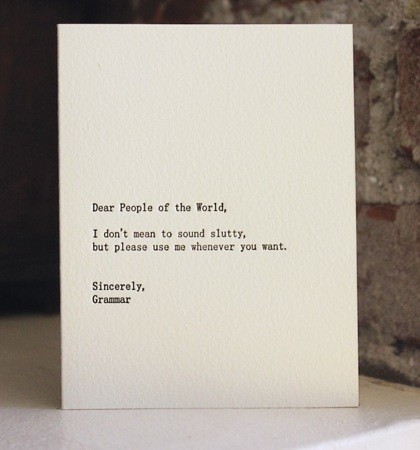 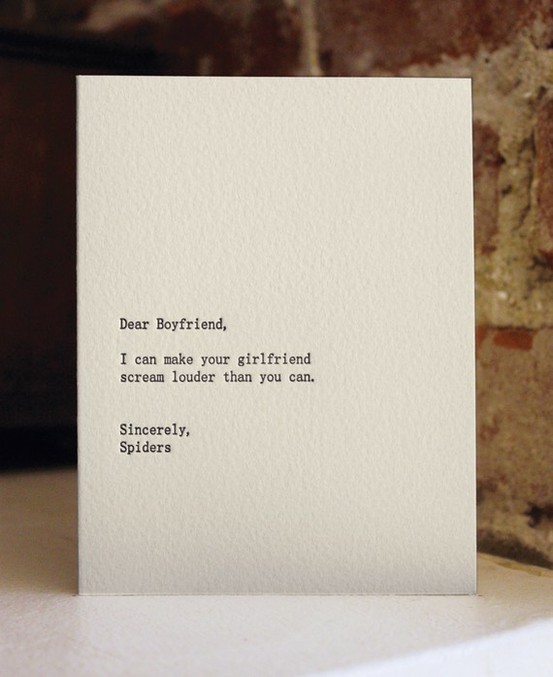 I first found a few of these Sapling Press funnies on Pinty. But now I look through their Etsy shop from time to time and have me a laugh.

They also sell amusing to do lists called things like ‘Shit to get done’ and ‘A list of things I will eventually get done in no specific order’.

A few weeks ago, I watched four girls get on the train together and start chatting amongst themselves. Their great energy caught my attention and I found it hard to look away.

I felt jealous. Not because of their fabulous earings – although there was that – but because they had that easy joy of closeness that you only have with your very best friends. They were giddy and silly and clearly delighting in one another’s company.

I haven’t been able to stop thinking about how spectacularly happy they were.

Right now, I’m pining so much for my precious friends that it almost feels physically painful. The friends I rarely see these days and who I almost never see all at the same time. It makes me feel a bit empty. A bit lonely.

But I can’t wait for the next two weeks to pass so I can have at least three friends in the same room at the same time. I know exactly how it will go. We’ll slip straight into our rhythm. Inside jokes, bullying Donna, laughing till our cheeks throb.

I feel so desperate for the last weekend of July to come that I can barely think of anything else.

I was wondering what other people watching the girls on the train might might have thought about them. Would they have simply been considered a noisy bunch?  I wonder if you have to know how it feels to have such wonderful friendships in order to recognise when other people have the same bond.

I have no idea why I’ve been lucky enough to have been blessed with so many beautiful friends. Friends with big hearts and huge spirits. Not just the girls visiting in a few weeks but all my friends.

My life is magic. And it’s because of the people it’s filled with.

This weekend, my Mumzy-in-law came to stay. We had a great time Museuming it up. It’s always nice exploring your own City with someone who doesn’t see it that often – it forces you to do touristy things that you wouldn’t normally do and to actually pay attention to the buildings you walk past every day.

We visited the State Library as well as six of the Historic Houses Trust properties. It turns out that Mumzy-in-law is the perfect museum companion. Like me, she wants to look in every room, read every sign, watch every video and sometimes double back.

Highlights of the weekend were:

– The Hyde Park Barracks.
Who knew this was such a fantastic museum? I shall be recommending it to international guests forever more! It has a really great summary of Australia’s convict history.

I was surprised to hear that we have a rat infestation to thank for the amazing museum the Barracks has become today. The 19th century rats that scurried beneath the floorboards dragged away clothes, food, newspapers, etc to build their nests. They left mountains and mountains of debris behind. Then in the the late 70s/early 80s when builders started to work on the museum, they found about 100,000 items below the floorboards in ‘ratacombs’. I don’t like rats one bit, but I do like that word. Ratacombs. Lol, lol, lol.

-The Mint.
Did you know that the old Mint was originally a Hospital? For the first 43 years of it’s existence it was referred to as the Rum Hospital. Apparently Governor Macquarie funded it’s construction by giving the building contractors the authority to import 45,000 gallons of rum.

During the gold rush, one wing was turned into a Mint and stayed that way for 74 years until Canberra was created and the Mint shifted there.

Something else I think is interesting is that Francis Greenway, the dude on our $10 note was actually a convict transported for forgery. Ah, the irony.

As a side note, the Mint Cafe also does a really good cauliflower soup!

– The World Press Photography Exhibition at the State Library.
Have you been to the old state library? Not the new bit on Macquarie Street, but the old section, opened in 1826? If you haven’t, then you really must go. And if you HAVE been, well then you are in quite a lot of trouble for not telling me how absolutley beautiful it is! I can’t believe I’ve lived in Sydney for 10 years and not known the library was so grand and gorgeous. The photography exhibition upstairs was great, but the highlight for me was walking into the library and gasping so loudly that the Librarian had a giggling fit.

I also LOVED the libray’s display of maps. They have all the incorrect versions where the early explorers thought that New Guinea and NZ were part of our country. There’s also incomplete versions, where parts of the country were still to be discovered. And then there’s the first correct map ever completed. I really, really wanted to touch the map Matthew Flinders did. Damn that glass cabinet!

– Dinner at Jazushi.
Live jazz plus sushi. Weird combo, excellent execution! Jazushi’s on Devonshire Street in what I now know was originally called Brickfield Hill, not Surry Hills. Apparently in convict days it was known as Brickfield because of all the clay it had underground. They made pipes and earthen ware from it.

– Brunch in the tea rooms at Vaucluse House.
The food was great and afterwards there was a lovely and knowledgeable guide who gave us a tour of the house, gardens and crypt. I really, really, really want to live in this house! It has fabulous high ceilings and old, old furniture. Divine!

I also have to say that after hearing all about Mr William Wentworth (whose house it once was), I think I have a bit of a crush. Maybe I’ll move to Wentworth now :)

– The Justice & Police Museum
The ASIO exhibition was really interesting but the old holding cells in this museum kinda gave me the heebie jeebies!  I was also mortified to see all the weapons they have on display. Some were from crime scenes (and still had blood on them!), some  confiscated by Customs, and some handed in as part of an amnesty.

–Afternoon tea at The Rocks Cafe.
I’ve been wanting to try their chocolate meringue cake for years!

– Wandering through the Botanic Gardens and then joining a tour of Government House. By all accounts, it sounds like our Governor is actually a really smart, lovely person. However I’m still not convinced we need her AND a premier.

– The Museum of Sydney.
I loved all the Australian and Aboriginal history in this museum. I also loved the 52 suburbs exhibition –  tres cool! It’s a selection of the photographs taken by Louise Hawson, who decided to explore one Sydney suburb each week for a year. This is exactly the kind of way I’d like to spend my time. Her images were fantastic and alot of them really quite funny.

I was also quite happy to discover that I’ve actually been to almost all the suburbs she visited.

Can Mumzy-in-law come to visit every weekend?