It’s a good thing I love rainy days because we’ve had quite a lot of them lately.

For as long as I can remember, I’ve always found rain comforting.

It’s quite lucky that I married someone who loves the rain too and not one of those people who think that being wet will make you sick. I’m not sure how many times I’ve had to remind my grandfather that germs are what make you ill, not going out without a coat!

Sometimes on rainy nights, Ian and I grab our umbrellas, huddle together and go out for walks. The air feels so clean and the world so refreshed.

Here’s a few of my favourite rainy day memories.

-When I was little, my parents took Leigh and I out of school one day, just so that we could go to Sydney to buy teddy bears. It was raining really heavily the whole drive down and I felt snug and safe in the car with my family and excited that we got to miss class to buy soft toys! Anytime I drive on the F3 now when it’s raining, I always think back to that happy day.

-In High School I always loved rainy days because it meant that the boys wouldn’t go and play sport at lunch time. Instead we’d all huddle together in a classroom or somewhere outside that was under cover. I remember one wet day I’d forgotten my jumper and Shannon Turner leant me his. It smelt delightfully like fabric softener!

-Ian and I have had lots of rainy day happies but I remember two in particular. Once was when we’d just finished school and had to go to Tighes Hill TAFE so that Ian could enrol in a course. Neither of us had cars back then so we had to catch public transport and it was pouring! I loved it because we got to dash, screaming (well, I was screaming) through the down pour and we were slipping and sliding everywhere. It was hilarious! It was mid afternoon and the only place open that we could dry off afterwards was Hogs Breath on Beaumont St. We had pumpkin soup and hot chocolate. It felt romantic.

-We had a similar kind of downpour dash when I was thinking of moving to Coogee, way back when I first started working. We’d caught a bus out to the Eastern Suburbs and were trying to walk around and get a feel for the area but ended up soaked instead. There’s just something fun about skidding across the streets trying to find somewhere dry to hide out and then getting to watch the rain from the dry spot while you catch your breath.

-When Leigh and I were in Berlin we were trying to check out some supposedly awesome flea markets. There were completely feral though and sold stuff like old dentistry equipment and stinky fur coats. While we were there it started pouring and the people behind the market stalls just sat there as though nothing was happening. All of the fur coats and hats they were selling just got drenched and they didn’t bat an eyelid.

-When Roslyn and I were in London together, walking through Notting Hill on our way to Kensington Palace it started raining cats and dogs. We had the most piss weak umbrellas ever and they blew inside out and we couldn’t get them right. I can just imagine all the people driving past laughing at the two of us getting drenched while we tried to turn out umbrellas the right way. After a while we just gave up, chucked them in the bin and made a run for it.

– And lastly, when I went to visit Donna in Melbourne a few months ago  there was about three days worth of storms to deal with. The first one started while we were in DFO which has a tin roof. The sound was almost deafening. The car park was flooded, there were black outs through the city and it took us almost two hours to drive less than 20 km. It felt like we were living in a natural disaster movie and we loved it. Until we got home late that night to find that her house was the only one on the street that had no electricity, we didn’t know who the energy supplier was  and every person Donna knew in Melbourne was hours away for a long weekend at some place with no phone reception. Donna tried to do something or other in the electricity box and that didn’t work so we lit candles, slept out in the lounge together and tried not to get scared. The next morning we had quick showers so the hot water wouldn’t run out and then went out for the day hoping it would all have sorted itself out by the time we got back. Which of course it hadn’t. But it was fine in the end…and after the ordeal was over, Gavin reminded us that the hot water is on gas so we could have had long hot showers after all.

Rainy days with people I love. My favourite. 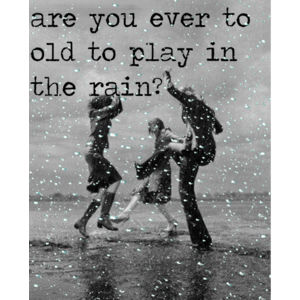